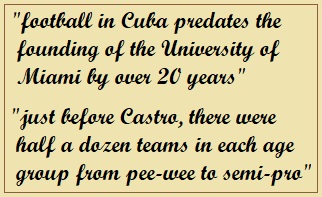 Football, the American version, was far more popular than soccer in pre-Castro Cuba (but, of course, far less popular than baseball). This page is a brief summary, with very interesting tidbits to whet your appetite and links with more extensive coverage.

Various organizations in Havana, including the University of Havana, schools, sports clubs and other entities, played football for over 50 years. The sports history on the island dates to 1905, a year before the first varsity squad at the University of Florida and over 20 years before the founding of the University of Miami. In addition to games between Cuban teams, there were also games against American teams, and back in 1910 a Cuban team defeated the Tulane University football team*. Castro, who took over on January 1, 1959, forbade the game, so it was last played in 1958. This information and considerably more, focusing principally on the years of the sport up to 1950, can be found here and here.

By the 1950's, when I played, there were half a dozen teams in each age group from pee-wee to semi-pro. In addition to the University of Havana and private schools like LaSalle and the Havana Military Academy, football was played at social/yacht/sports clubs (which were socially exclusive institutions of the upper and middle-class) such as Vedado Tennis Club, Miramar Yacht Club and Club de Profesionales. The play-off and championship games of varsity high school through semi-pro teams were covered by Cuba's leading newspapers (see examples here and here). 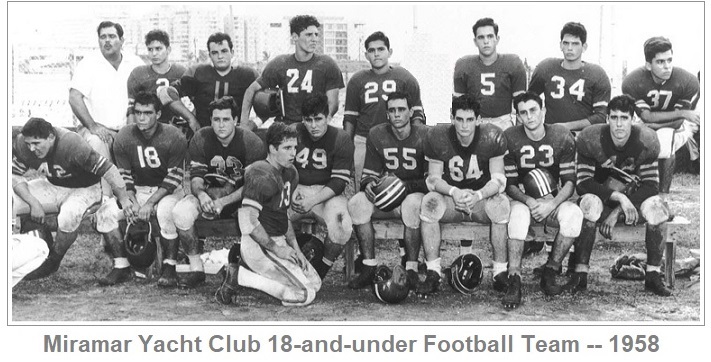 ________________
* To be fair, this is the only citing of a Cuban team defeating an American team, and in virually all other such games the Cuban teams were beaten badly.