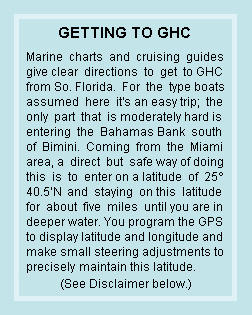 This page has four boating trips from Great Harbour Cay ("GHC") plus a few other suggestions. The first of the trips is a guided trip, but don't ignore it if you're a skilled boater, because this is a great adventure. The other three trips are unguided but can be made by anyone with even average boating skills; I cover first the destinations and then tell you how to get there. Several options are presented, but beginners should take the "first option" listed under "Getting There". You still need to familiarize yourself with current charts, but the "first option" has mainly deep water, with few shallows, and those that exist are easily avoided if you've learned the visual cues that distinguish them. Remember that, generally, deep ocean lies to the east of the GHC and shallower water to the west (the Bahama Bank).

For the unguided destinations I'm assuming an outboard-engined open-fisherman boat, under 30 feet, at 30 MPH. For reasons which will become evident later, I'm also assuming that your first trip to these destinations start from a point east of GHC (in the map below, roughly under the "G" of "Great Harbour Cay"). See the Disclaimer and Release at the end of this page.

Guided. For those concerned about unknown waters and preferring a guide, a day trip with Kenny (Bubba) is quite an adventure. You and your family bring the drinks and side dishes, and Kenny does the rest. He directs you to his secret points, dives for fish and lobster while your snorkeling family floats on the surface watching the action, takes you to a deserted island, gathers wood for a fire and cooks up a fish and lobster feast. Price varies depending on the number of people and time of year and starts at around $250, but remember that you are getting a guide, a show and a whole-family meal that may carry you through the day. Plus you're familiarizing yourself with the surrounding waters. Ask for Kenny at the marina or call him at 451-1044 before you come to the island. 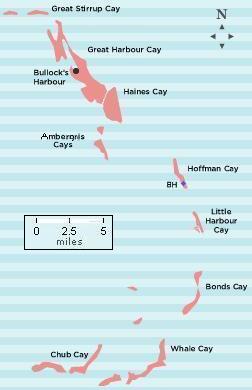 Blue Hole. In nearby Hoffman Cay (just 8 miles south of GHC, shown as "BH" with a blue dot on the map at right), this is an oddity: a round, salt-water hole in the middle of a rock island. About the size of a baseball infield, it connects to the ocean near the bottom of its 600-foot depth. Explored by Jacques Cousteau, it is believed to have been formed either by a meteorite strike or some other natural cataclysm. Some believe that you simply can't go to GHC without seeing this wonder of nature (click here for pictures). An overhanging rock platform allows children and brave adults to jump about 25' to the water below, and floating on the crystal clear water is like therapy. From the east side of GHC, it's about a 30-minute trip. Anchor in the cove just off 25o 37.24'N, 77o 44.43'W and walk inland along the trail.

Flo's. Lunch at Flo's, in Little Harbour Cay, south of Hoffman Cay, is a delight. Conch fritters and cracked conch are specialties. Typically you call Flo's on Ch. 68 at least 4 hours before arriving to order your food. I like to call Chester (Percy Darville's brother) at 1-242-457-3969 the day before or early the same morning to make sure they have what we want (because they only cook fresh stuff) and to make sure he knows we're coming. To get to Flo's from the Blue Hole, you border the west coast of Hoffman and Little Harbour Cays, avoiding a few sandy shallows, and then enter the channel at the southern end of Little Harbour, going north until you see Flo's on your right; excercise caution and ask Chester for help if in doubt. It's roughly 45 minutes from east of GHC, or 15 minutes from the Blue Hole. A good -- but very busy -- day trip is the Blue Hole, lunch at Flo's and then the Ambergris Cays described below; that night, the kids will sleep like angels!

Ambergris Cays. These cays lie just south of Great Harbour and Haines Cay and provide a good stop-over on the way back from the Blue Hole and/or Flo's. The sand on the east coastline and the protection afforded by the islands to the east (Haines and Hoffman), result in a tranquil beach paradise. This is especially good for kids, even the smallest. We anchor at 25o 39.34'N, 77o 49.63'W, walk inland 50 yards or so and come to a shallow channel. If you go after high tide and enter the channel there, you will be carried at a swift pace towards the ocean, exiting at a sand bank not far from where you anchored. Then you do it again. Kids will do this for hours.

Other Destinations. There is an airplane wreck in about 15 - 20 feet of water just off the beach in front of the Beach Club, easily reached with a dinghy; it's at 25o 44.74'N, 77o 49.74'W. There are beautiful reefs in 2 - 15 feet of water just east of Hoffman Cay; after visiting the Blue Hole, just go south bordering the west coast of Hoffman, turn east to pass between Hoffman and the small cay south of Hoffman, and then turn north on open waters for about a mile; passage between the two cays is fairly safe, just go slow (no-wake speed) and post a lookout on the bow (obviously, you want to do the same as you approach the reefs). Although fishing is great near GHC, the Tongue of the Ocean, just south of Chub Cay (see top map), is world-famous for its fishing; on a calm day you can go via the "first option" route defined below (on the outside, bordering the east coast of the islands), but a faster way of getting there (or if the seas are rough) is to take the "second option" below (inside the shallow waters of the Bahama Bank, diligently following a channel marked on current charts), but without turning east at Waypoint 3 and instead following the channel headed south all the way to Chub Cay (all the warnings cited below apply, such as up-to-date charts and good familiarity with your GPS). 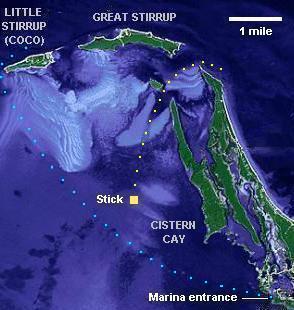 Getting There. Because of shallows, it's difficult-to-impossible to go directly from the GHC marina (on the west of the island) to the destinations listed above. The easiest path is to circle around the north end of the island, get on the east side and then head south. But that initial circling -- from the marina to the east side of the island -- can take a while if you take the most obvious route, which is shown in light blue dots on the figure at right and takes you all the way around the west and north sides of the Stirrups to avoid the shallows to their south. It's a very long ride that might take 40 minutes. And remember, it's an additional 30 minutes to the Blue Hole, 45 minutes to Flo's.

But there's a faster way. Shown on the figure in yellow, it works even at low tide for the size boats assumed here. From the marina entrance you head to a marker "stick" at 25o 47.37'N, 77o 54.39'W, passing close to the southwest point of Cistern Cay. With the boat on-plane at 30+ MPH and the outboard engine(s) trimmed up, you pass just west of the stick moving north and do a little east-then-north jog to follow the sand trail for roughly 50 yards north of the stick. Then you head for the east tip of the small cay south of Great Stirrup (a good aiming point is 25o 48.53'N, 77o 54.03'W). Sounds hard but it isn't. And remember that this works even at low tide, so at other times you have a large margin of error. The big advantage is time -- you can get to the east side of GHC in about 15 minutes instead of 40.

This first option, circling via the "stick" to get to the east side of the island and then heading south, is for anyone with even average boating skills. As said earlier, you need current charts and the ability to distinguish and avoid any small shallows you encounter, but you'll find mostly deep water. The two additional options presented below are more challenging. 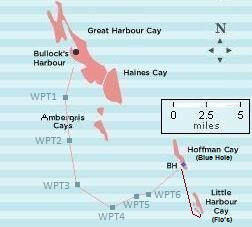 A second option from the GHC marina to the above destinations is particularly good if the seas are rough. It's done by going on the shallow waters of the Bahama Bank and diligently following a channel marked on current charts which takes you south from the marina for about 10 miles, then taking the channel that turns east when you are abeam of Flo's at Little Harbour Cay. That's not a bad option to get to Flo's but it's a long ride to the Blue Hole and from there to the Ambergrises, and you'd better know how to use the chart and a GPS to stay inside the channel, since there are shallows all around. For reference only, the waypoints are shown below and a graphical representation is shown at right, but do not attempt this without an up-to-date chart and good familiarity with your GPS. As indicated earlier, if you stay on the south-heading channel instead of turning east at Waypoint 3, you can get to Chub Cay and the Tongue of the Ocean.
WPT1 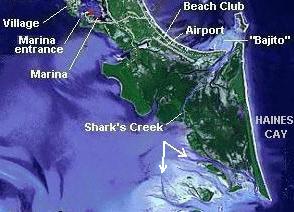 A final option, shown at right, is only for flats boats, when the tide is at mid-level or higher, and only after you've learned the way from someone who knows the area. You go south from the marina, bordering the land, and get on one of the two thin darker channels shown by the arrows. You can see in the figure that these channels take you all the way to the south of Haines Cay. Actually, even bigger boats like the ones assumed here can take this route, but only at high tide; these are tricky channels, so don't try them until you've done them with a guide and have recorded the route(s) on your GPS (I have the route waypoints, but will not give them out).

Disclaimer and Release. I believe that the information presented here was generally accurate at the time it was written. But severe weather (e.g., hurricanes) can lead to substantial changes. The information is provided without any warranty, is presented for reference only, should not be relied upon, and should be used only to augment information obtained from marine charts or other official/reliable/credible sources. If some of this information conflicts with that obtained from other sources, ignore this information. Finally, you use this information solely at your risk and, by using it, you agree to release me from any liability.