Note: Our team played its last season in the Winter of 2004. Most of
the girls are now playing in the varsity team of their schools.
So this page remains largely for its nostalgic value. 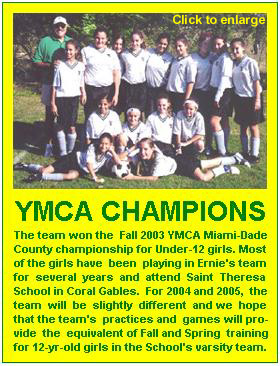 This page contains topics to help the girls in Ernie's 2004 soccer team. Also, scores are at the end of this page.

We will be honing three (3) skills/strategies this year, without forgetting the ones we've learned before (like kicking away -- not through -- our sweet spot and taking a "second bite of the apple"). Both text and graphics are used below to cover these topics in detail (4 - 5 minutes reading time), but here's a summary:

1. We're going to stress the concept of controlling and advancing the ball, rather than just kicking it when it gets to us. If possible, we're going to pass it to a teammate.

2. We'll be playing with a new (and dangerous) full-forward defense, using some of our best players as backfielders to make a stand far from our goalie.

3. The new formation makes it essential that players be in the right position, which in turn depends on where the ball is.

TOPIC #1 -- "NO" KICKING
This is a skill we should have down pat, but some of you are still missing: unless you're threatened, no more kicking the ball in the general direction of the opponent's goal. That was OK when we started, when you were 7 years old. But you're big girls now, some taller than your Mom. It's time to play real soccer, where you advance the ball and pass to your teammates.

If no opponents are close, you are expected to control the ball, dribble forward, and, if possible, pass to your teammate. Notice that this is like two steps:

Step 1. Control the ball and dribble it forward (advance it).

Step 2. If possible, pass to a teammate when threatened.

Step 2 is harder. It requires you to be aware, while dribbling, of where your teammates are and must be done so that your pass is not intercepted by an opponent. So step 2 is, for the moment, optional. But step 1 is mandatory. As the ball approaches you, you will be expected to decide "do I have time to control and advance the ball or is an opponent so close that I should simply kick it?". If there is time, do not kick the ball. Control it and advance it. Expect for me to holler at you if you kicked the ball when there was plenty of time to advance it.

One other thing: if you dribble forward, make sure you get rid of the ball early enough so that it's not taken away. In short, get rid of it before an opponent gets too close. Pass the ball If you can do it effectively, or simply kick it forward. Oh, and when you kick -- when it's not a pass -- let's have full-power kicks, no wimpy stuff.

TOPIC #2 -- NEW (AND AGGRESSIVE) DEFENSE FORMATION
This is perhaps the biggest change to date. We're adopting Coach Lucy's aggressive defense, where the backfields (yes, this is also a new term which I'll explain shortly) play well forward, away from our goalie. To understand it look at the figure below.

Notice where the backfields are when our forwards have the ball near the opponents' goal. In a straight line virtually (but not quite) inside the opponents side of the field. Providing "in-your-face" support to our offense. That's why I'm calling them "backfields" rather than defensive players. Notice also that the center backfield is identified by an "S". She is the Sweeper. The other backfields line up with her, and they hold their position (rather than back-up) when an opponent approaches with the ball.

There are several points to this new alignment. First, it's sometimes called an "offside trap" formation, because it often causes the opponents to be offsides (and our backfields will signal the ref with an outstretched-hand signal when this happens). Second, it establishes our defense well away from our goalie, avoiding the old problem of a ball stopped and trapped near our goalie which suddenly squirts into the goal. But most importantly, it requires that the backfields be among the best players in the team. They must have the skills to stop the ball and the speed to overtake an opponent who gets through.

It's specially important that players cover the holes and figure out where they should be. This is a dynamic process which depends on where the ball is. In the figure below, the ball is on the sideline, about to be thrown in by our team, and the left midfielder is out of position, leaving a big area uncovered. A box in dashed lines shows where she should be. Think "in my area, where is the ball likely to be next?" and try to be there.

WRAP-UP
Let's wrap this page up by repeating the summary presented earlier:

1. We're going to stress the concept of controlling and advancing the ball, rather than just kicking it when it gets to us. If possible, we're going to pass it to a teammate.
2. We'll be playing with a full-forward defense, using some of our best players as backfielders to make a stand far from our goalie.
3. The new formation makes it essential that players be in the right position.


We've won all of our games this year, except for the Championship Game. Here are the scores: